Surtur is ~4 kilometers in size and thus one of the smallest known irregular moons of Saturn. It has been discovered in 2006 joint with eight other outer moons. Surtur’s mean distance to Saturn is ~23 million kilometers, with one revolution around the planet on a retrograde orbit requiring 3 years, 6 months and 3 weeks.
Cassini tried to observe Surtur during two observation campaigns in 2012 and 2016, but pointing was apparently not precise enough and Surtur managed to escape us. Therefore, the rotational period is not known.

Fig. (middle): From the 2-panel mosaic at apoapsis of orbit 233/234, all images of the 1st “footprint” were co-added, as were all of the 2nd. The resulting ‘image 1’ was then subtracted from ‘image 2’. If Surtur were in one or both frames, a fuzzy black or white spot would have shown up — but it did not.
Fig. (right): Planning plot of the 1×2 mosaic from orbit 233/234 in an inertial reference frame, showing the movement of the Cassini spacecraft (parallaxe). The pointing swiches between the two “footprints” were done approximately every hour.

This page compiles (much of) our knowledge of Surtur in compact form. Its main focus lies on the documentation of my Cassini-ISS work (observation planning). In the 1st section, it also provides general information obtained from other work, like discovery circumstances and orbital and physical parameters. It does not include the raw data (images or spectra) taken by the Cassini spacecraft, these are available at NASA’s Planetary Data System (PDS). For further reading on Surtur and on irregular moons of Saturn in general, see the reference list at my ‘Outer Moons of Saturn’ page.

(1) Surtur’s name was announced on 05 Apr 2007 in IAU circ. 8826. It is taken from the Norse mythology where Surtr is a Jötunn (frost giant) who plays a major role during the events of Ragnarök (a series of future events).

(3) Estimated under assumption of a spherical equatorial circumference.

(7) The density of Surtur is not known, the given number is speculative. There are indications from other Saturnian irregular moons that these objects have quite low densities (well below 1 g/cm3), similar to comets or some of the inner small moons of Saturn. However, a higher density, maybe up to 2.5 g/cm3, cannot be ruled out.

(16) Given is the best apparent magnitude as seen from Cassini at a time when an observation took place.

(20) Hill radius at periapsis in Surtur-radius units. With $R_{Hill}=\sqrt[3]{4\pi\rho_{Sur}/9m_♄}\cdot r_{Sur↔♄}$, this number only depends on the object’s distance to the central body (Saturn; linear dependency) and on the object’s density (proportional to the cubic root; see also note (7)).

Table of contents:
(8A) Table: Surtur observations overview
(8B) Map: Surtur in the sky of Cassini
(8C) Surtur geometry and visibility graph (range, phase, and magnitude vs. time)

Fail notes (Cassini ISS)
– ISS_177OT_SURROT015 (22 Dec 2012): Surtur not seen, very likely mispointed due to insufficient ephemeris.
– ISS_177OT_SURROT012 (24 Dec 2012): As two days before. In addition, straylight from nearby Saturn saturated the images of the last third of the observation.
– ISS_233OT_SURROT044 (21 Mar 2016): Object again not found despite 1×2 mosaic alongtrack and rather good capture prognosis; likely mispointed.

Observational circumstances and geometry information for the three ISS observation requests of Surtur.

b Rev. = revolution = Cassini orbit number; peri = periapsis segment. Note that (for some reasons) the true number of orbits since Saturn arrival in 2004 is off (ahead) by 1.5 compared to the official count which is noted here and used in all technical aspects.

f Calculated from the absolute magnitude H, the observation phase angle α, and the distances of Surtur to the sun and to Cassini.

(8B) Map: Surtur in the sky of Cassini 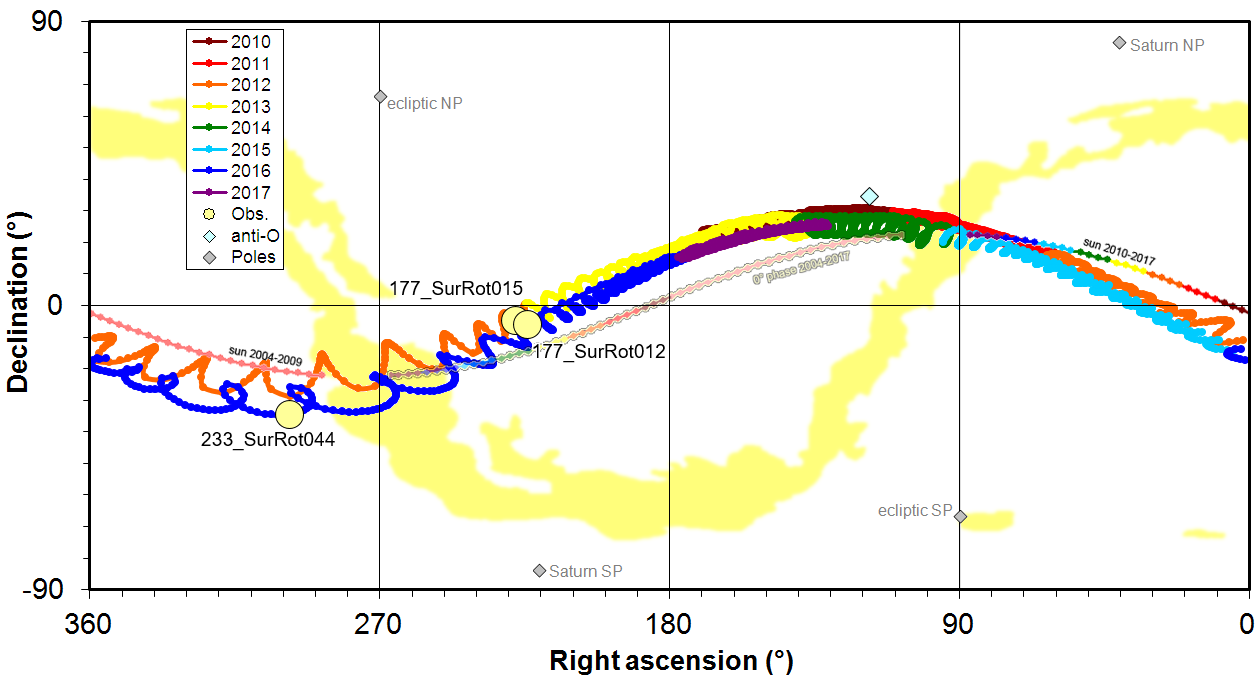 Surtur as seen from Cassini between 2010 and 2017. Orthographic projection of the sky; geocentric coordinate system (RA/Dec). As a retrograde object, Surtur moves from left to right.

Shown are Surtur’s locations (colored, wiggled lines), the Surtur locations during Cassini observations (light-yellow circles with annotations), the anti-directions of the Cassini observations (bluish diamonds), the location of the sun from 2004 to 2017 (smooth sinusoidal line from RA ∼ 290° to ∼ 85°; the sun moves from right to left), the location of the anti-sun (0° phase) from 2004 to 2017 (pale sinusoidal line from RA ∼ 110° to ∼ 265°), the Milky Way (yellow band) and the Magellanic clouds (yellow spots to the lower right), the ecliptic poles (gray diamonds), and Saturn’s poles (gray diamonds). 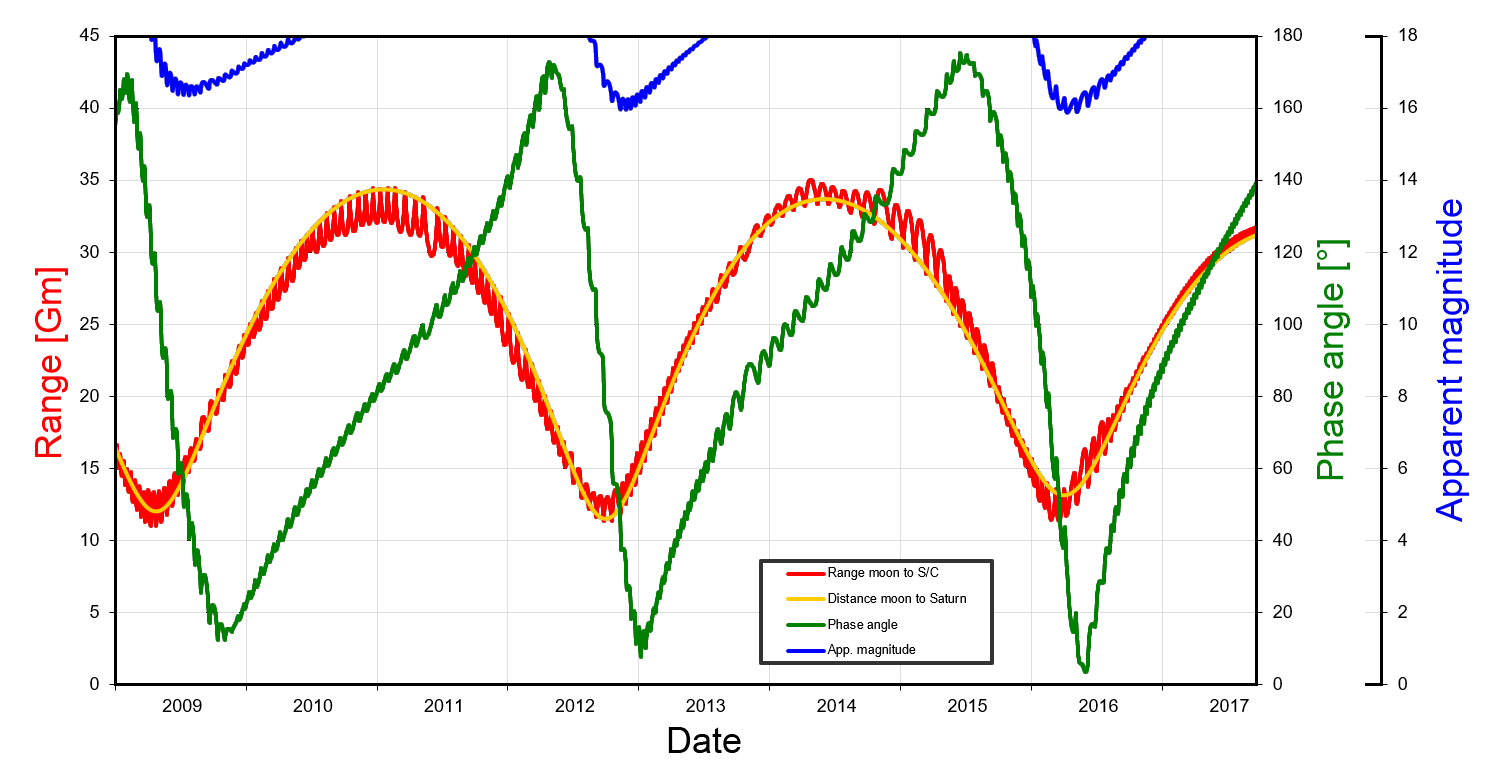 This graph has been used for Surtur observation scheduling.

Notes: Left axis: Range of Surtur to Cassini (red) and to Saturn (orange); right axes: phase angle (green) and apparent magnitude of Surtur (blue) as seen from Cassini for the time range 01 Jan 2009 to 15 Sep 2017 (end-of-mission).