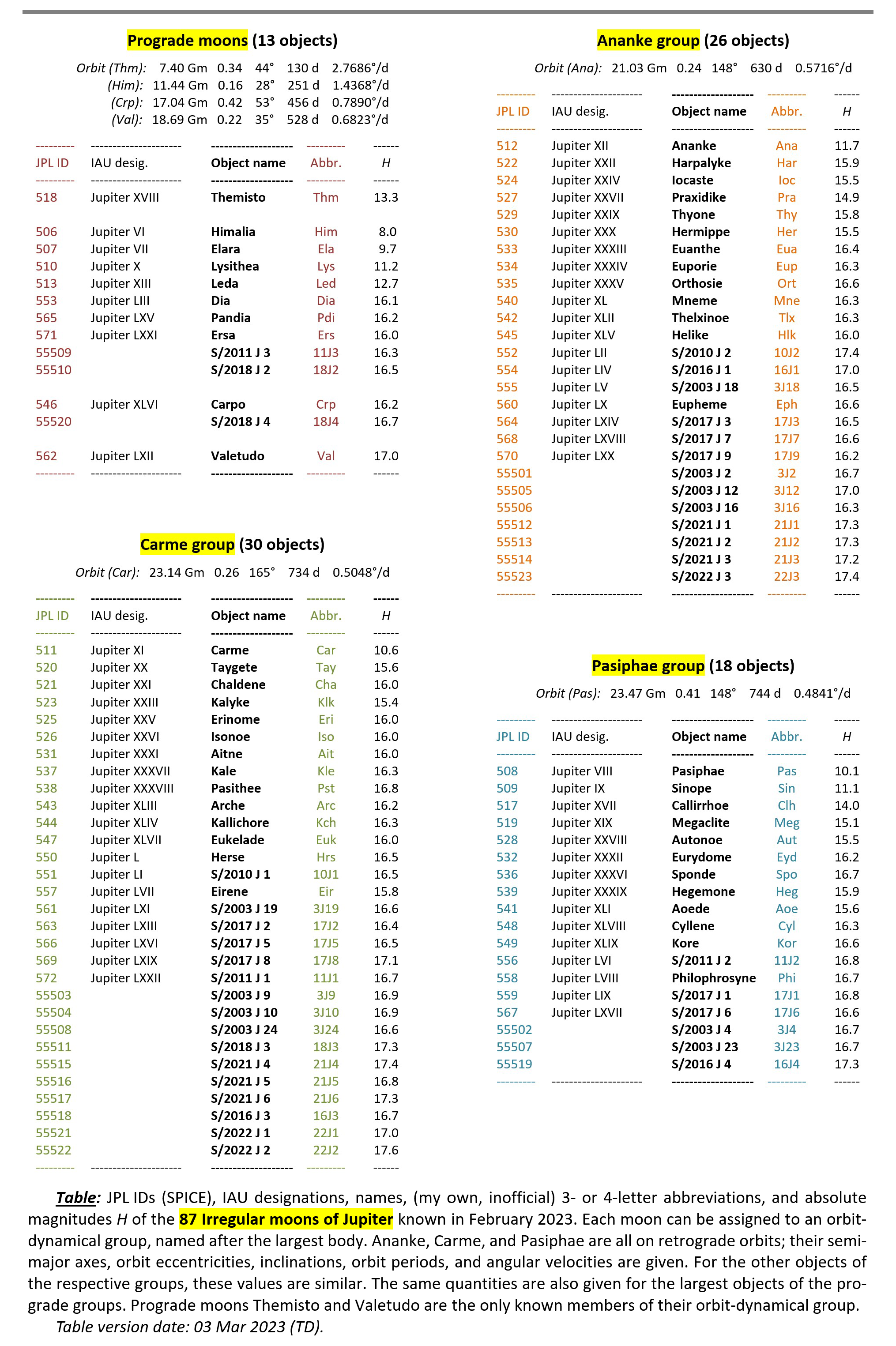 • An overview of names and absolute magnitudes of all known Jovian irregular moons is given in the screenshot here. (Does not include at least 57 additional objects without known orbits.)
• Johnston’s Archive provides orbital and dynamical data as well as physical data for all solar system planets and satellites.

Table: Physical and astronomical properties of the largest irregular moons of Jupiter

(1)…SPICE is a commonly-used information system of NASA’s Navigation and Ancillary Information Facility (NAIF). It assists engineers in modeling, planning, and executing planetary-exploration missions, and supports observation interpretation for scientists. Each planet and moon obtained a unique SPICE number.

(3)…Apparent magnitude as seen from Earth (R-band); from S. Sheppard’s Jupiter satellites website. Smaller numbers indicate brighter objects. The magnitude scale is logarithmic, with an object of 6th mag being 100x darker than a 1st mag object. The human eye can spot celestial objects down to ∼6th magnitude.

(4)…The absolute magnitude is the magnitude (brightness) of an object if located 1 au away from the sun and observed at 0° phase angle (i.e., the observer virtually sits at the center of the sun in this definition). Smaller numbers again indicate brighter objects. The H values listed here were taken from Table 1 of the paper of Grav et al. (2015) who refers to Rettig et al. (2001). The Themisto value is from S. Sheppard’s page. Be aware that different sources list quite different values for H; e.g., compare with values from MPEC, a NASA Fact Sheet, JPL’s ssd page, S. Sheppard, or Table 12.1 in Jewitt et al. (2004) (which has the same values as the Sheppard site).

(5)…Albedos and diameters are from WISE and NEOWISE data published in Table 3 of Grav et al. (2015). The axes of Himalia are from our Cassini work, published in Porco et al. (2003). The Themisto diameter is again from S. Sheppard; the Themisto albedo is a guess.

(6)…All values are synodic rotation periods. The Himalia value is from our Pilcher et al. (2012) paper. The Lysithea, Sinope, Carme, and Ananke periods are from Luu (1991). Because of the short observation timelines, they are likely inaccurate and thus notated in brackets only. Luu (1991) also observed Elara, Pasiphae, and Leda, but could not deduce periods.
For Elara, Wikipedia gives ∼0.5 d. JPL’s HORIZONS Web-Interface also has this value, but I could not find a proper source from where they got it. Maybe it was taken from Table 6.1 in Stanton Peale’s chapter in the 1977 Planetary Satellites book of the University of Arizona Press? If so, it would definitely be wrong because all unknown periods in this table are listed as “0.5 d”. Thus, no Elara rotation period is added to my table here.
Leda was observed by Rettig et al. (2001) over three consecutive nights, but they could not extract a rotation period. They thus note ∼24 h as a possible value for Leda, but I do not believe that because a non-detection of a period does not necessarily point to a period close to Earth’s. It may also mean that the equatorial cross-section of the object is rather spherical with no prominent albedo markings, that the object’s pole axis was pointing close to the observer, that the rotation itself is very slow, or that the observation’s signal-to-noise ratio was insufficient.

(7)…The data for the orbital parameters were taken from MPEC (January 2018). For the orbit period, I used the values of the orbit frequency n and converted them into units of days.

(8)…These abbreviations are my own and not official.