Phoebe has been discovered in 1899; this was the first discovery of an irregular satellite in the solar system and the first discovery of a moon through photography. With a size of 219 km × 217 km × 204 km and containing >98% of the mass of Saturn’s irregular-moon system, it is the giant of Saturn’s outer moons. Phoebe’s mean distance to Saturn is ∼13 million kilometers; this is among the smallest of all known Saturnian irregular moons, with one revolution around the planet on a retrograde orbit requiring 1 year and 6 months.
By synchronizing the shape model of Phoebe with ground-based stellar occultations and lightcurves, the rotation period was determined to 9 h 16 min 25.14 sec ± 0.07 sec. Different to the orbit direction, the spin direction is prograde. Since the north pole of Phoebe’s rotation axis points quite close to Saturn’s rotation north pole, the seasonal variations on Phoebe’s surface are very similar to the planet’s and the inner moons’s seasons; the sub-solar latitude varies by about ±25° over the course of one Saturn revolution about the Sun. On 11 June 2004, the Cassini spacecraft made a close flyby three weeks before arrival at Saturn.

Fig. (left): Short animation of Cassini images of Phoebe while moving through constellation Virgo on 07 Jan 2015 (21 frames; time span: 2:04 h; exposure times: 1.5 sec; range: 12.7 million km; Cassini orbit: rev 211). In the first image, the object is marked by a black cross. The background stars move through the field of view because the camera of the fast moving Cassini spacecraft was tracking Phoebe. The slight horizontal jitter of Phoebe is due to improper tracking at the arcseconds level. Flickering bright spots stem from cosmic-ray hits on the camera’s CCD detector, fixed bright or dark pixels are incorrectly calibrated hot or cold pixels on the CCD, respectively. The space background, in reality pitch black, is displayed in dark gray because this makes visibility of the object easier. Image IDs: N1799321159 to N1799328599.

This page is intended to compile (parts of) our knowledge of Phoebe in compact form. Its focus is on the documentation of my Cassini-ISS work (observation planning and data analysis), but it also provides general information obtained from other work, like discovery circumstances and orbital and physical parameters (including Phoebe’s rotation period). It does not include the raw data (images or spectra) taken by the Cassini spacecraft, these are available at NASA’s Planetary Data System (PDS). For further reading on Phoebe and on irregular moons of Saturn in general, see the reference list at my outer-Saturnian moons page or the reference list below.

This website is still under development, and more content will be added in the forseeable future. I will remove this note when the page will be close to completion. In the meantime, for example the Phoebe entry in Wikipedia is a rich first-order source of information and references.

(1) Phoebe’s name was suggested by W.H. Pickering about a month after discovery in a note from E.C. Pickering published in the Harvard College Observatory Circular and in identical letters to the Journal of Popular Astronomy, the Astronomical Journal, and the Astronomische Nachrichten. It is named after Phoebe, a sister of Saturn and a Titaness in greek mythology, and follows the scheme of naming Saturnian moons by his siblings, introduced by John Herschel in his work Results of Astronomical Observations made at the Cape of Good Hope from 1847 (in paragraph (398) of chapter VI on page 415).

(4) Designation given to the object in the first announcement; the guidelines are explained here and have not been invented at the time of Phoebe’s discovery.

(7) Given are the date of the photography wherein Phoebe was spotted for the first time, and the discovery-announcement date. The Phoebe discovery was reported in a hand-written Bulletin of the Harvard College Observatory in Cambridge, MA. Phoebe was the first ever satellite in the solar system detected photographically.

(8) The discoverer team included: William H. Pickering, DeLisle Stewart. The discovery announcement was made by Edward C. Pickering, older brother of W.H.P. and director of Harvard College Observatory at that time.

(3) Phoebe might be the parent body of several small irregular moons (esp. the Mundilfari group), but this is completely unclear so far; see also Fig. 1 and Table 2 in Denk et al. (2018)

(2) Half the diameter value. While the diameter is the intuitive size number, the radius r is mainly used in formulas to calculate other quantities.

(5) Here, a is the long equatorial, b the short equatorial, and c the polar axis dimension of the reference ellipsoid (see Table 4 in Denk et al. (2018)).

(13) As (12), but in geocentric coordinates (Right Ascension and Declination).

(14) From Miller et al. 2011; see also Tables 2 and 4 in Denk et al. (2018). The absolute visual magnitude H is the magnitude (brightness) of an object (in the visible wavelength range) if located 1 au away from the sun and observed at 0° phase angle (i.e., in this definition, the observer virtually sits at the center of the sun). The magnitude scale is logarithmic, with an object of 6th mag being 100x darker than a 1st mag object.

(16) From Table 3 in Denk et al. (2018). Given is the best apparent magnitude as seen from Cassini at a time when a low-resolution lightcurve observation took place (i.e., not during the targeted flyby in June 2004 where Phoebe became much brighter and bigger).

(19) Hill radius at periapsis under the assumption of the given density (see note (7)).

(20) Hill radius at periapsis in Phoebe-radius units. With $R_{Hill}=\sqrt[3]{4\pi\rho_{Pho}/9m_♄}\cdot r_{Pho↔♄}$, this number only depends on the object’s distance to the central body (Saturn; linear dependency) and on the object’s density (proportional to the cubic root; see also note (7)). 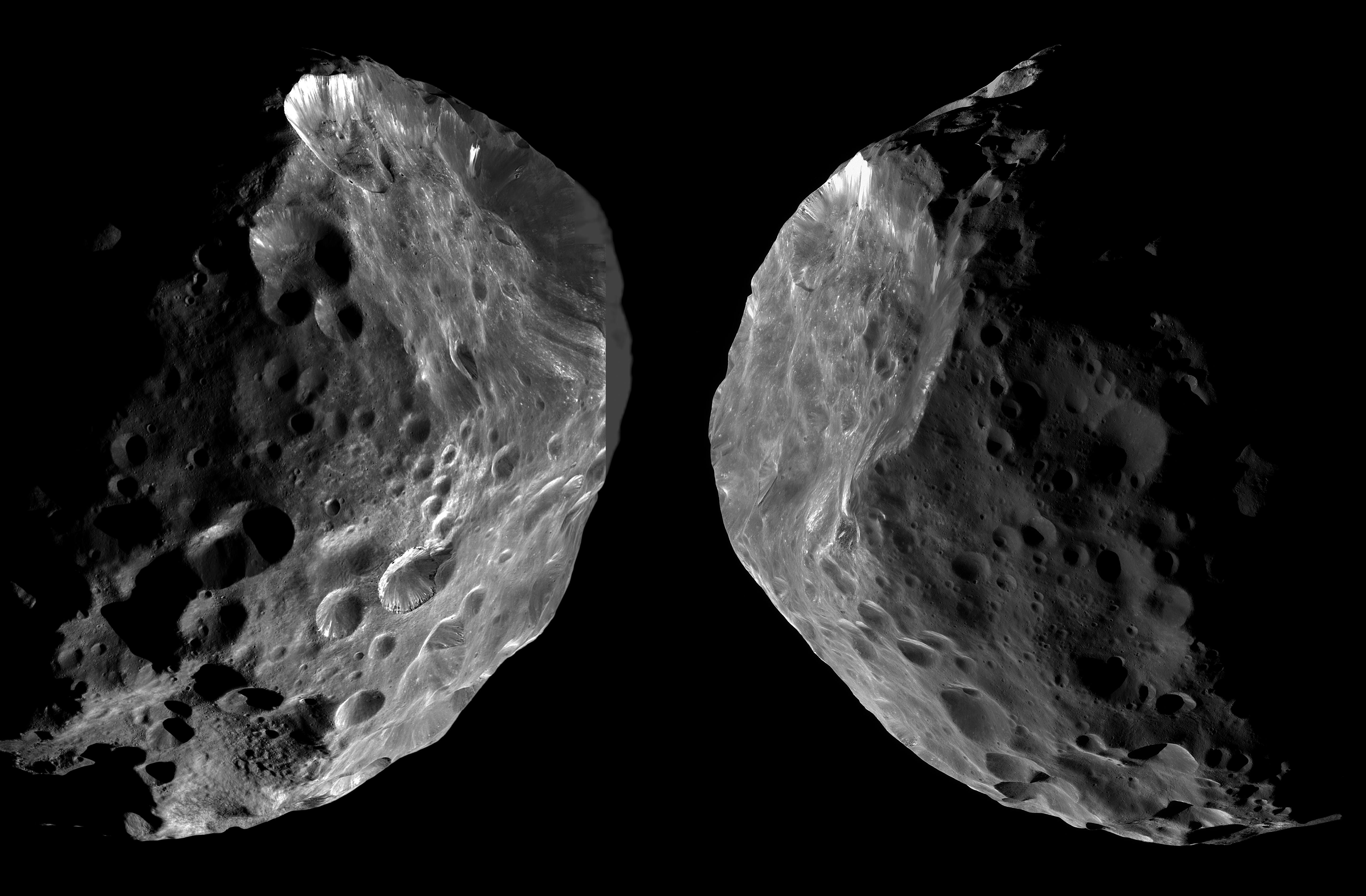 Phoebe as seen with Cassini’s narrow-angle camera within ±1 hour of closest approach in June 2004. 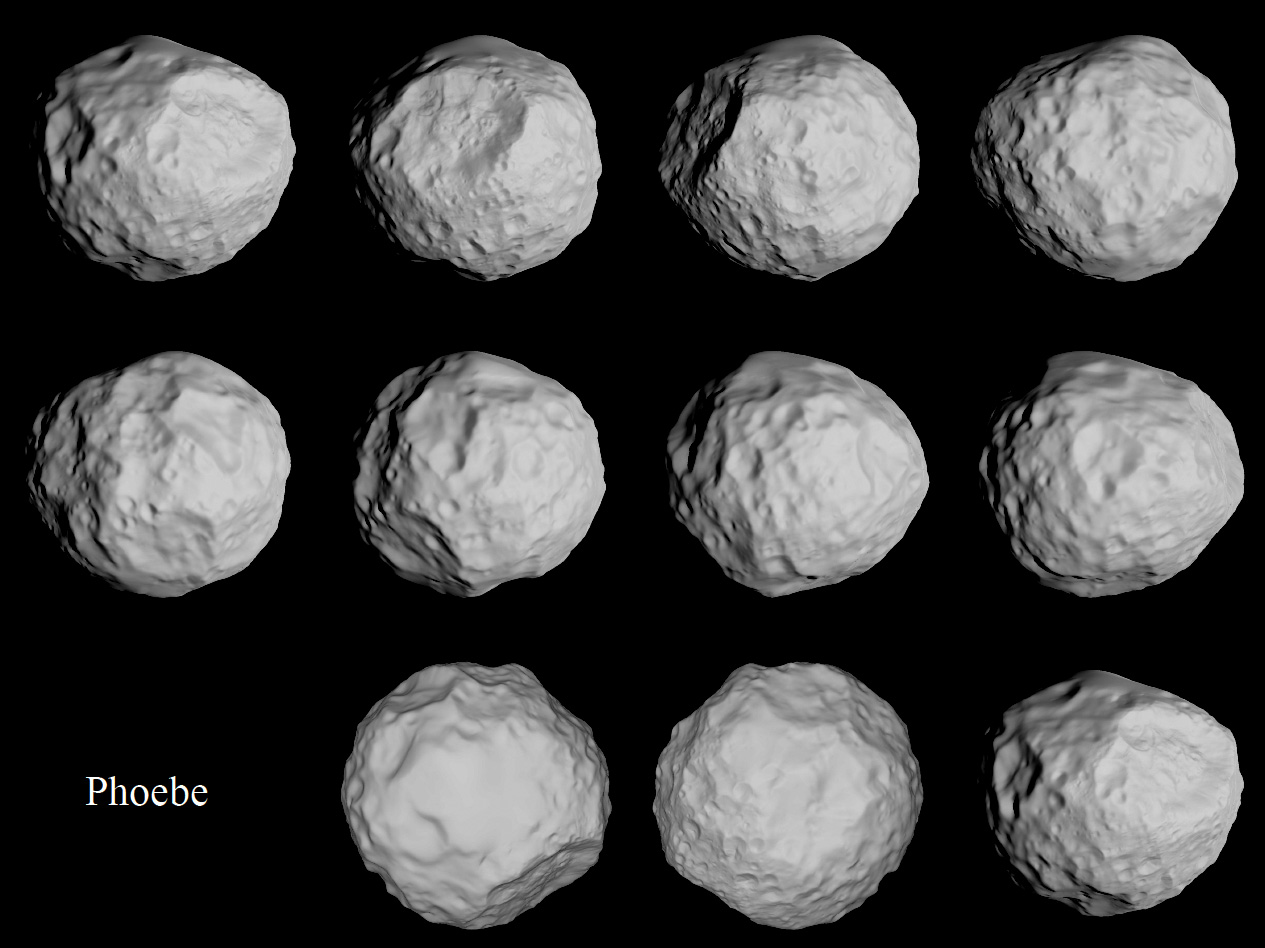 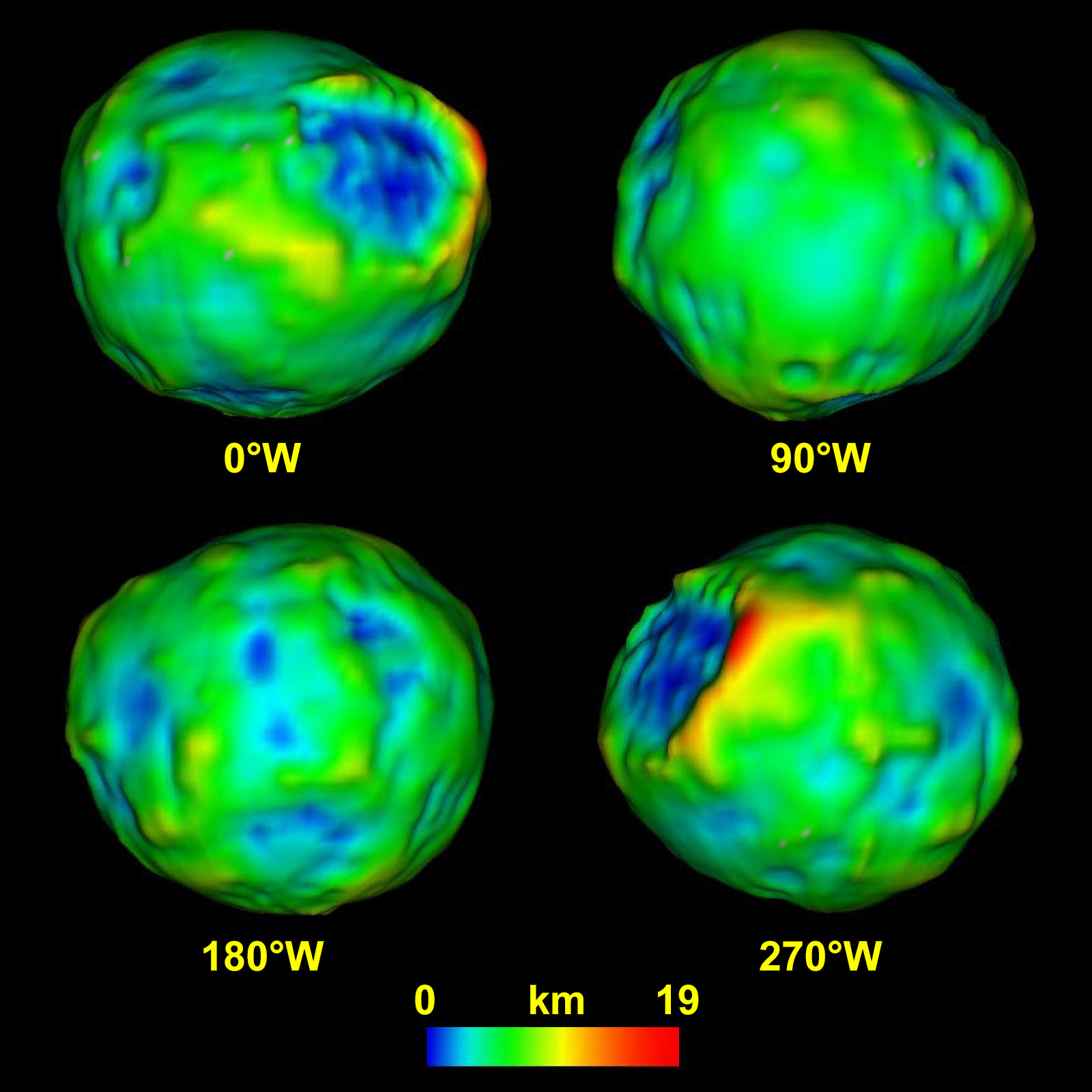 The calculation assumed homogeneous mass distribution, and accounts for rotational accelerations. Equatorial views with north at the top. Viewpoint longitudes are noted.

References (that include my work) (time-ordered; newest first)