Albiorix is ∼29 kilometers (±5 kilometers) in size and the third largest irregular moon of Saturn. It has been discovered in 2000 joint with eleven other outer moons. Albiorix’s mean distance to Saturn is ∼16½ million kilometers, with one revolution around the planet on a prograde orbit requiring 2 years, 1 month and 3 weeks. Albiorix is the largest member of the Gallic family.
From our Cassini measurements, the rotation period was determined to 13 h and 20 min ± 2 min. The Albiorix lightcurves show a large brightness variation, indicative of a rather elongated shape of this moon.

Fig. (left): Short animation of Cassini images of Albiorix while moving through constellation Bootes on 28 Jan 2017 (21 frames; time span: 3:18 h; exposure times: 10 sec; range: 8.3 million km; Cassini orbit: rev 259). In the first image, the object is marked by a black cross. The background stars move quite rapidly through the field of view because the camera of the fast moving Cassini spacecraft was tracking Albiorix, and Cassini was close to its orbit’s periapsis. The slight horizontal jitter of Albiorix is due to improper tracking at the arcseconds level. Flickering bright spots or streaks stem from cosmic-ray hits on the camera’s CCD detector, fixed bright or dark pixels are incorrectly calibrated hot or cold pixels on the CCD, respectively. The space background, in reality pitch black, is displayed in dark gray because this makes visibility of the object easier. Image IDs: N1864300447 to N1864312316.

Fig. (right): Modified DIGIT plot showing Saturn’s largest moons, the Cassini spacecraft, and Albiorix on 18 Jan 2015 while the observation phase angle dropped to 5°. The Sun is up.

This page is intended to compile much of our knowledge of Albiorix in compact form. Its main focus lies on the documentation of my Cassini-ISS work (observation planning and data analysis). In the 1st section, it also provides general information obtained from other work, like discovery circumstances and orbital and physical parameters. It does not include the raw data (images or spectra) taken by the Cassini spacecraft, these are available at NASA’s Planetary Data System (PDS). For further reading on Albiorix and on irregular moons of Saturn in general, see the reference list at the end of this page.

This website is still under development. As soon as papers will be reviewed or other information will be processed appropriately, more content will be added. I will remove this note when the page will be close to completion.

(1) Albiorix’s name was announced on 08 Aug 2003 in IAU circ. 8177. It is taken from the Celtic mythology where Albiorix is identified with Celtic Mars.

(1) Determined by Grav et al. (2015) from NEOWISE data. Since it was determined from stacked images with an SNR ∼ 3, this diameter value is still uncertain.

(2) Half the diameter value. While the diameter is the intuitive size number, the radius r is mainly used in formulas to calculate other quantities. Important: The precision of this number is similar to the diameter precision (see note (1)).

(5) Here, a is the long equatorial, b the short equatorial, and c the polar axis dimension of the reference ellipsoid. Unknown because no shape model is available yet.

(7) The density of Albiorix is not known, the given number is speculative. There are indications from other Saturnian irregular moons that these objects have quite low densities (well below 1 g/cm3), similar to comets or some of the inner small moons of Saturn. However, a higher density, maybe up to 2.5 g/cm3, cannot be ruled out.

(9) Rotation period P and error determined with Cassini data; from Table 3 in Denk and Mottola (2019). See the lightcurves section below for details. The spin rate is 24/P, measured in units of one per day.

(14) From Table 2 in Denk et al. (2018); the number may be uncertain by several tenths of magnitude. The absolute visual magnitude HV is the magnitude (brightness) of an object (in the visible wavelength range) if located 1 au away from the sun and observed at 0° phase angle (i.e., in this definition, the observer virtually sits at the center of the sun). The magnitude scale is logarithmic, with an object of 6th mag being 100x darker than a 1st mag object.

(16) From Table 2 in Denk and Mottola (2019). Given is the best apparent magnitude as seen from Cassini at a time when an observation took place.

(20) Hill radius at periapsis in Albiorix-radius units. With $R_{Hill}=\sqrt[3]{4\pi\rho_{moon}/9m_♄}\cdot r_{moon↔Saturn}$, this number only depends on the object’s distance to the central body (Saturn; linear dependency) and on the object’s density (proportional to the cubic root; see also note (7)).

Table of contents:
(2A) Availability of Cassini observations and results
(2B) Imaging observations (ISS)
(2C) UVIS and VIMS

UVIS and VIMS were occasionally taking data (outside my responsibility) while Cassini pointed toward Albiorix, but (to the best of my knowledge) only a short look was taken on the UVIS data so far. Signal was received, but contamination from nearby background stars appear to be an issue. For VIMS, even Albiorix might have been too dark. Since Albiorix was the brightest irregular moon for Cassini (after Phoebe), the chance to get useful spectra from UVIS or VIMS might be best for this object.

Table of contents:
(8A) Table: Albiorix observations overview
(8B) Map: Albiorix in the sky of Cassini
(8C) Albiorix geometry and visibility graph (range, phase, and magnitude vs. time)

(includes most IOI files plus post-downlink notes) [ not yet available ]

Observational circumstances and geometry information for six ISS observation requests of Albiorix. From Table 2 of Denk and Mottola (2019), plus additional data. Information for requests not used in this paper will follow at a later date.

f Calculated from the absolute magnitude H, the observation phase angle α, and the distances of Albiorix to the sun and to Cassini.

(8B) Map: Albiorix in the sky of Cassini 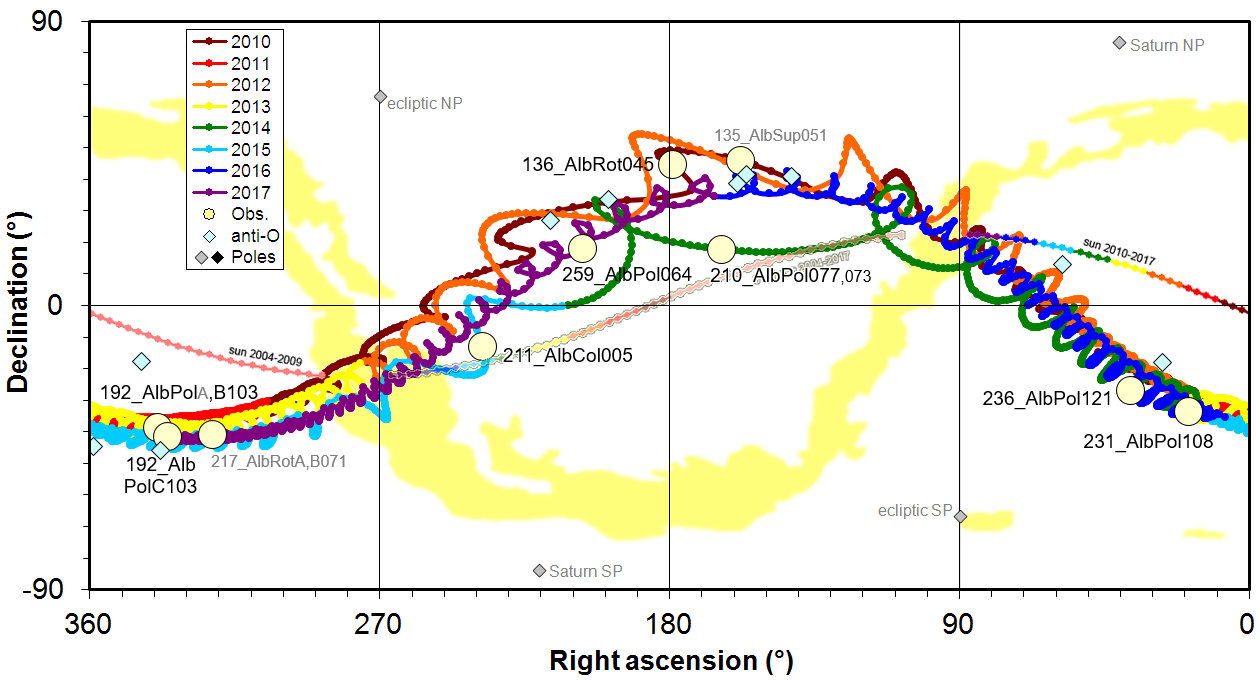 Albiorix as visible to Cassini between 2010 and 2017. Orthographic projection of the sky; geocentric coordinate system (RA/Dec). As a prograde object, Albiorix moves from right to left.

Shown are Albiorix’s locations (colored, wiggled lines), the Albiorix locations during Cassini observations (light-yellow circles with annotations), the anti-directions of the Cassini observations (bluish diamonds), the location of the sun from 2004 to 2017 (smooth sinusoidal line from RA ∼ 290° to ∼ 85°; the sun moves from right to left), the location of the anti-sun (0° phase) from 2004 to 2017 (pale sinusoidal line from RA ∼ 110° to ∼ 265°), the Milky Way (yellow band) and the Magellanic clouds (yellow spots to the lower right), the ecliptic poles (gray diamonds), and Saturn’s poles (gray diamonds). 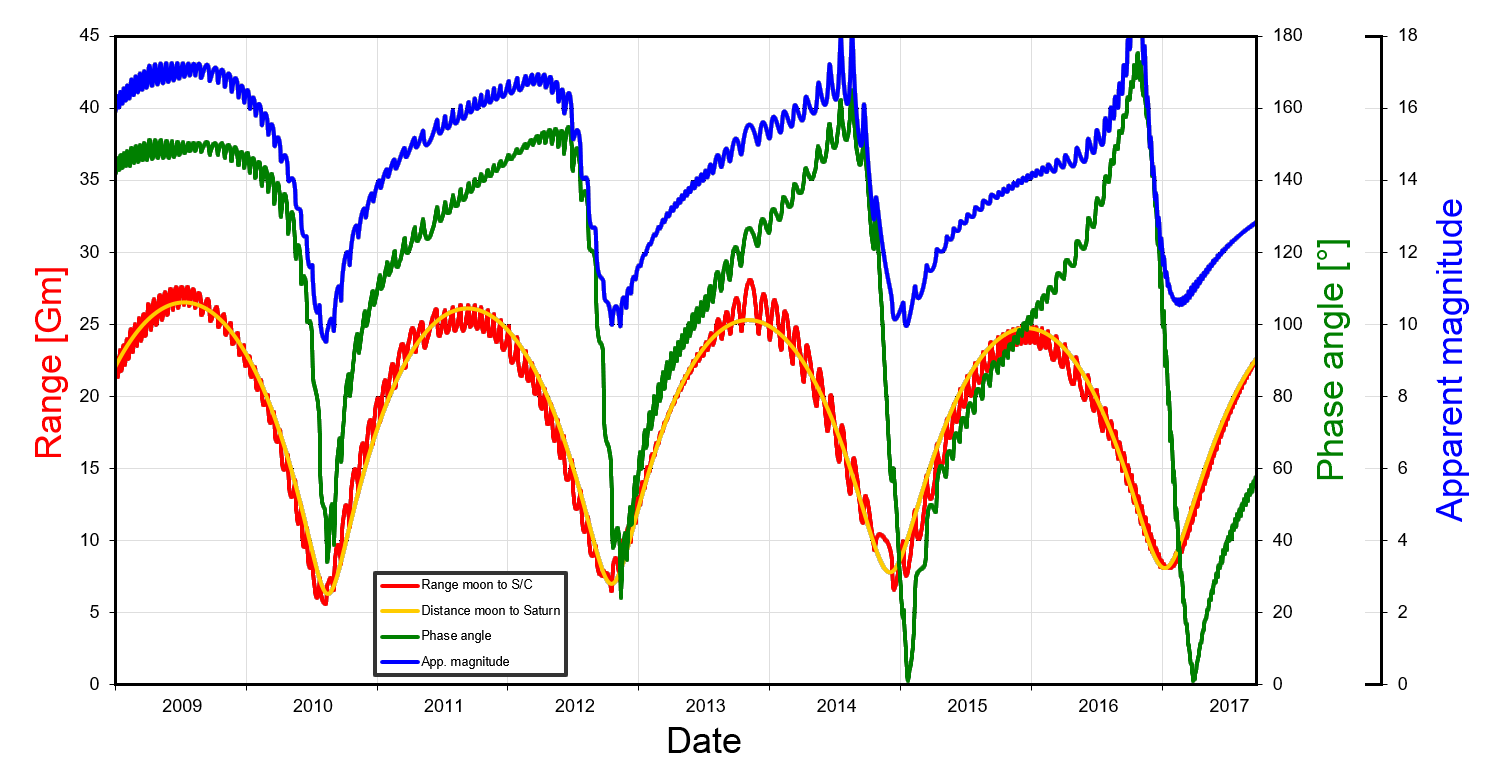 This graph has been used for Albiorix observation scheduling.

Notes: Left axis: Range of Albiorix to Cassini (red) and to Saturn (orange); right axes: phase angle (green) and apparent magnitude of Albiorix (blue) as seen from Cassini for the time range 01 Jan 2009 to 15 Sep 2017 (end-of-mission).