The DLR Institute of Planetary Research in Berlin (Germany) was participating in the IVO mission by contributing the Thermal Mapper (TMAP) remote sensing instrument. IVO was a proposal to NASA’s Discovery program; this program has the goal to achieve outstanding scientific results by launching planetary missions which are smaller, cheaper, and more focused, but also more numerous than large missions like Cassini. The final selection for Discovery missions 15 and 16 occured in June 2021. Among the four competitors — a Venus orbiter (VERITAS), a Venus atmosphere probe (DAVINCI+), IVO, and a flyby mission at Neptune’s largest moon Triton (Trident) —, the two Venus missions have been selected.

Fig. (middle): Image mosaic of Io, obtained by the Galileo SSI camera on 07 Sep 1996. The colorization is caused by sulphur, sulphur dioxide, and siliceous compounds.
Fig. (right): Volcanic eruption at Tvashtar Catena (60°N, 120°W on Io), observed by the Galileo spacecraft on 22 Feb 2000. The false-color image was taken in violet, green and near-infrared filters; for the eruption area, IR filters up to a wavelength of 1 µm were used.

This website gives a short overview of some of the numerous interesting aspects of the IVO mission. A reference list with weblinks and scientific papers for more in-depth reading is provided at the last sheet of this page. 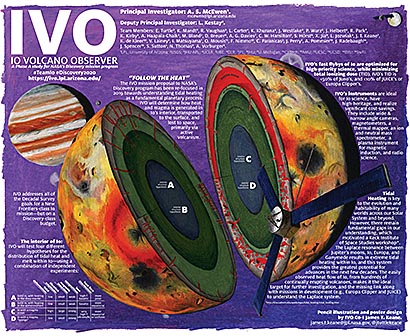 • 02 Jun 2021: NASA announced that the two competitor missions VERITAS and DAVINCI+ have been selected for flight. IVO will not be realized.

• 18 Oct 2019: Alfred McEwen, Katherine de Kleer, and Ryan Park about tidal heating, orbital resonances, and what we will learn from missions like IVO to the outer Solar system → article on eos.org.

With discard of the IVO mission by NASA in June 2021, the information in this sheet is only of historic relevance.

(3A) Cruise and Orbit Tour Table

(3B) Cruise and Orbit Tour Plots

Fig. left: Cruise trajectory of IVO for a January 2029 launch and August 2033 arrival at Jupiter. After one orbit about the Sun, a gravity-assist maneuver at Earth and one at Mars give the spacecraft enough boost to reach Jupiter after ∼4.5 years flight time.

• In the orbit-tour plot, blue dots show the apoapsis positions of IVO. The concentric ellipses at lower right represent the orbits of the Galilean satellites Io (innermost), Europa, Ganymede, and Callisto (outermost). The red dot indicates the Io flyby locations. Jupiter is at the center.

• Most of the time in orbit, IVO will reside north of Jupiter’s equatorial plane “behind” the planet, i.e. Jupiter and the Galilean moons will mainly be visible as crescents (phase angle >110° early, and temporarily >160° later in the mission).

• Mission end is currently planned through Io impact on 06 Jul 2037, but an extended mission may be flown instead.

With discard of the IVO mission by NASA in June 2021, the information in this sheet is only of historic relevance. 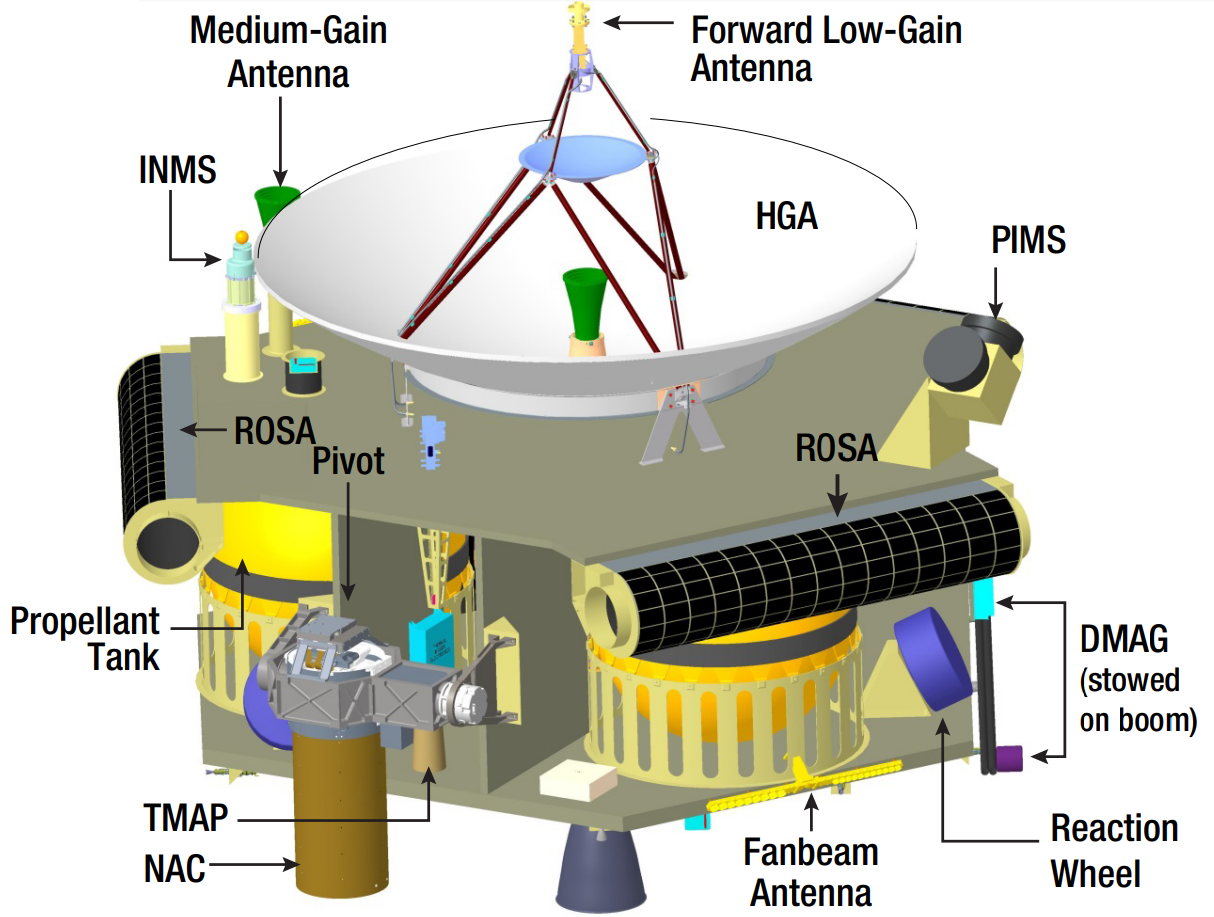 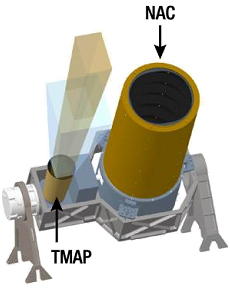 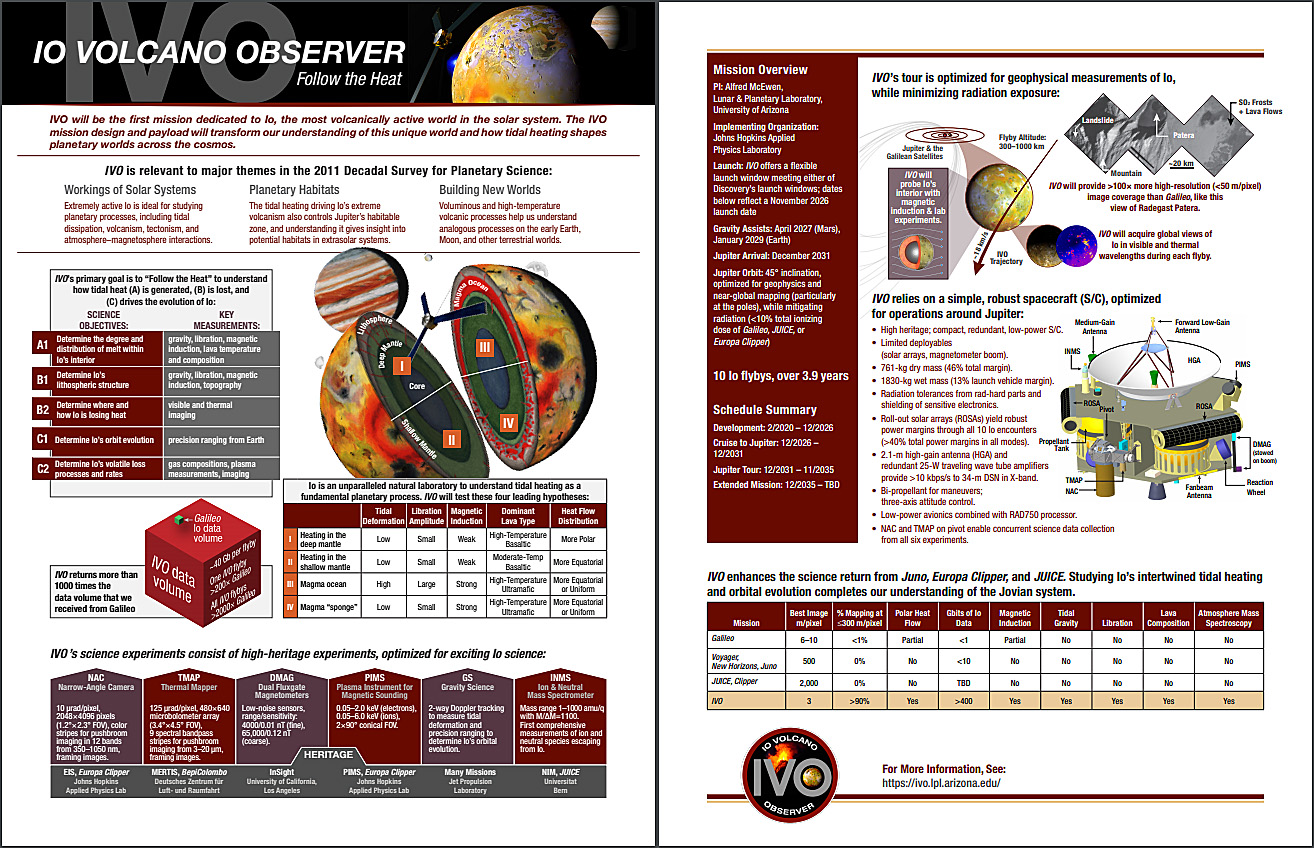 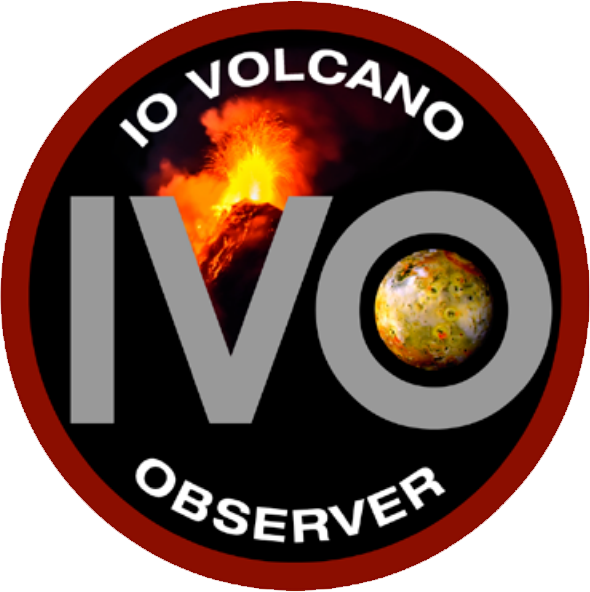 (7) Footage from the project

IVO/TMAP-Seite am DLR in Berlin

Abstracts on TMAP: LPSC 2015; LCPM Berlin 2015
A very similar instrument flying with BepiColombo to Mercury is

I am very grateful to the following institutions and persons:
• DLR (Deutsches Zentrum für Luft- und Raumfahrt) in Berlin-Adlershof — they gave me leave to work with Cassini/Saturn at Freie Universität (FU) Berlin for 16 years, and now (since January 2020) employ me again for working in the Jupiter system.